Speaking to the growing trend of recent moves by companies toward domestic outsourcing strategies that include contracting with third-parties to staff teams offsite as well as workforce augmentation, Genesis10 CEO Harley Lippman was quoted in an article in the July-August issue of ChannelVision Magazine.

“As we expected there is growing realization that sending work offshore often translates to decreased productivity, security risks and hidden costs that negate intended cost savings,” Lippman said. He referred to a recent survey of executives by Genesis10 that documents the trend. According to the survey, moving forward, only 11 percent of survey respondents are looking offshore to acquire talent while 46 percent are outsourcing domestically. 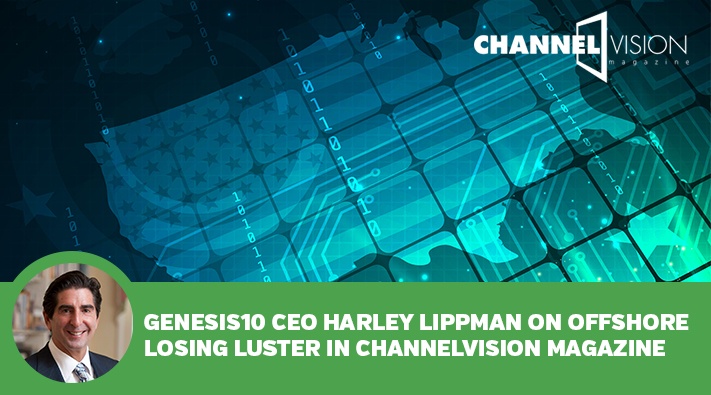 As companies focus on effectively leveraging investments in new technologies that yield increased operational efficiency, more profitability and higher customer satisfaction, the supply of talent with the necessary skills, experience and training to lead and staff these initiatives is historically tight.

As a result, 70% of companies are rounding out mission-critical delivery teams with outside contract workers who can seamlessly integrate into projects and who intuitively understand the relationship between project goals and business impact, the Genesis10 survey says.

Read the article Offshoring IT Help Losing its Luster on page 41 of the digital edition of the July-August issue of ChannelVision Magazine.

ChannelVision is a bi-monthly magazine and website read by channel partners selling all manner of voice, data, access, managed and business services — both on premise and “in the cloud” — as well as technology gear and equipment primarily in the small/medium business space.