Genesis10 has released the results of a study that finds the appeal of offshored IT work has declined significantly in favor of domestic outsourcing strategies. With a tightening labor market, companies are shifting from using offshore sourcing strategies -- which have been almost a default position for realizing labor savings – towards domestic strategies that include contracting with third-parties to staff teams offsite as well as workforce augmentation. In fact, looking forward, only 11% are looking offshore to acquire talent while 46% are outsourcing domestically. 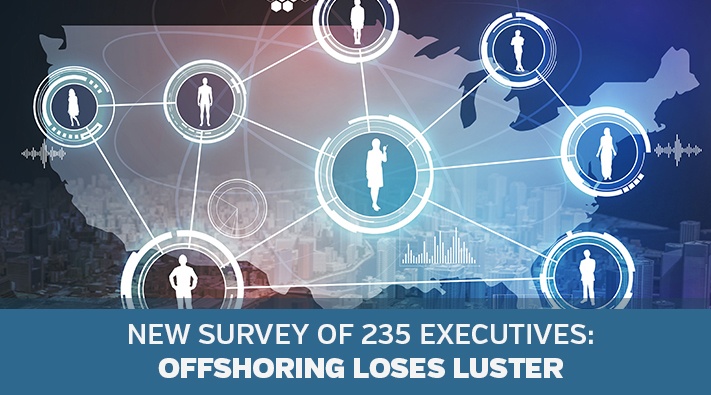 The study surveyed 235 executives regarding their strategies for optimizing their capabilities in a rapidly modernizing IT arena where they face increased pressure to drive initiatives in areas such as artificial intelligence, cloud computing, business intelligence, blockchain, DevOps, and cybersecurity. Over the past several years, enterprises have invested significantly in acquiring technologies capable of yielding increased operational efficiency, more profitability and higher customer satisfaction. Now they have turned their focus to effectively leveraging these investments in order to implement tech-driven business strategies faster and better than their competition. At the same time, the supply of talent with the necessary skills, experience and training to lead and staff these initiatives is historically tight.

In addition to the offshoring decline, key findings from the Genesis10 study include:

“Companies have placed huge bets on IT modernization, and the data is clear,” said Lippman. “With no margin for error and a tight market for talent, there is a critical mass looking outside the enterprise for talent management solutions that allow them to separate from the pack and then maintain market leadership. Staff augmentation, training and domestic outsourcing are proving to be the key ingredients.”