Where others see a challenge, Genesis10 CEO Harley Lippman sees an opportunity. Reflecting on his career achievements in a profile in LEADERS magazine, Lippman says that he’s proud of where Genesis10 is, “but I am always focused on identifying new mountains to climb.”

In the in-depth interview, Lippman tells the story of how he founded and grew Genesis10 into a leading IT staffing and consulting company. The story begins after he sold another company he had founded, Triad Data. He asked 12 people to place his trust in him to start Genesis10. Of the 10 who agreed, eight are still with the company. Genesis10, a name that means new beginnings, was founded in 1999.

On his leadership approach, Lippman said, “I always personally interview people who join Genesis10. It makes a difference to our culture and it is integral to the company’s success...I believe that leadership is about nurturing your people, building the best team, and creating a culture of trust.”

Named one of the most influential leaders in the staffing industry by Staffing Industry Analysts (SIA), Lippman is recognized in USA Today as one of the Best CEOs in the U.S. Genesis10 has earned national recognition as a top IT staffing firm from SIA, Gartner and Everest Group, and has received a Best Leadership Team award from Comparably.

Founded in 1978, LEADERS has been described as “the exclusive boardroom of the best and the brightest.” Its editorial mission is to give voice to some of the world’s most innovative and thoughtful leaders with an aim of inspiring leaders across the globe. Published quarterly, each issue addresses the unique challenges shared by leaders: coping with change, developing a vision, creating strategic alignments and coalitions, setting directions, energizing teams and creating a profitable future. 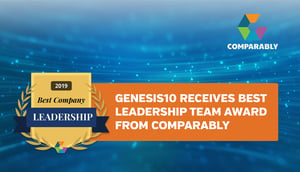