Understanding Offshore Challenges Leads to Growth in Relocating Work within the U.S.

A recent New York Times article finds that not only are more organizations choosing onshoring as a workforce strategy, but also that this trend is expected to continue to grow stronger in coming years. 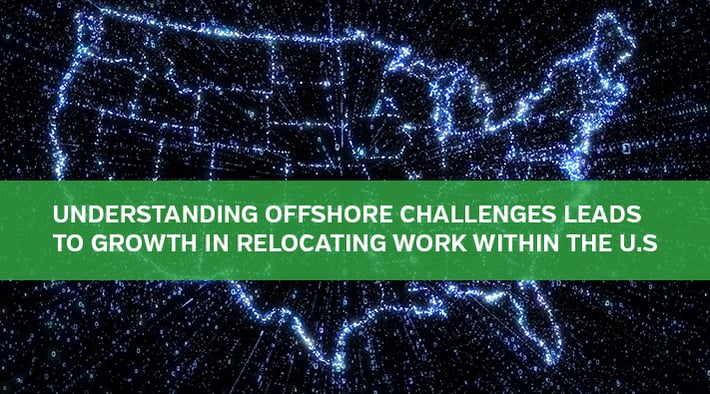 In the article, “The White-Collar Job Apocalypse That Didn’t Happen,” writer Ben Casselman demonstrates that Economist Alan S. Blinder, who conducted  a famous 2007 study that estimated that as many as 29% of jobs were potentially offshorable, neglected to consider factors in addition to labor cost go into the decision to move work to other regions of the world. Among the jobs mentioned as potentially offshorable were those held by knowledge workers such as computer programmer. We now know that labor quality plays a greater role in knowledge work where the product is less of a commodity.

Through our work with our clients at Genesis10, we’ve seen that proximity and business/contextual acumen both impact productivity and quality as well as minimize rework.  As we were developing and delivering IoT prototypes that leveraged Scrum and DevOps for one client, we experienced productivity gains by a factor of 6x (from 30 story points in a two-week sprint, to 91 in a one week sprint).

The feedback from our client was that the productivity and delivery pace was far faster than imagined which was attributed to removing corporate distractions by leveraging an onshore model where the team was working in the same time zone, possessed business/contextual acumen and they were able to optimize the cost of labor and delivery by using an onshore partner.

As Casselman points out in his article, companies have learned that the decision to move jobs outside the U.S. needs to take into account such factors as “time differences, language barriers, legal hurdles and the simple challenge of coordinating work half a world away.” In some cases, he writes, “companies decided they were better off moving jobs to the less expensive parts of the U.S. rather than out of the country.”

Looking at data compiled since the 2007 study, a new report published in late September by Adam Ozimek, Chief Economist at Upwork, “Overboard on Offshore Fears,” finds that instead of being offshored, the types of work predicted to be at risk of offshoring are increasingly being performed remotely by workers within the U.S. Among its other findings:

Though economists have disagreed with dire warnings about offshoring, one assumption that has gone largely unchallenged is that the primary way firms will choose to embrace new technologies is by hiring overseas, points out the 2019 Upwork report.

Our experience has shown that while offshore will be part of Corporate America’s workforce strategy and delivery model, how it is utilized—which functions and skill sets—has evolved.  The tight tech labor market is causing companies to rethink where and how work is performed as well as influencing digital enablement strategy. One of the top three constraints cited by the c-suite is lack of technical capabilities.

“This emerging trend has dramatic implications for the labor market and represents a much more optimistic view than the fears of offshoring that many commentators have historically focused on. By enabling more remote work opportunities, technological advancement provides greater freedom, more flexibility, shorter commutes, and the potential to redistribute those opportunities within the U.S.”

A Genesis10 blog earlier this year describes this alternative, “The ability to tap into another market to scale the workforce in a flexible manner in a secure environment is an attractive option to traditional staffing onsite or engaging expensive consulting firms to execute the type of work efforts that can be outsourced in the U.S.”

In an interview with Proactive Investors in August 2018, Genesis10 CEO Harley Lippman said, “American workers are more productive,” dispelling the myth that offshoring is cheaper than hiring workers in the U.S., by explaining that labor rates, while cheaper in India, for instance, are only one factor in the equation.

Move work to low-cost cities in the U.S.

In his study, Ozimek suggests that new research should consider how remote work could help shift demand within the U.S. to low cost of living areas that are currently lacking in economic opportunity.

He writes that the growth of remote work has the potential to provide workers across the U.S. more access to the best jobs. “Workers in struggling places have the same linguistic, cultural, currency, and educational advantages that help U.S. freelancers compete in the global marketplace. Yet they have a lower cost of living that helps them compete with U.S. workers in the most expensive cities.”

Susan Lund, who has studied the future of work for the McKinsey Global Institute says that a growing number of organizations are shifting operations to cities like Columbus. No American location can compete directly with India on labor costs, she said, but shifting jobs elsewhere in the country can narrow the gap.

“The companies that started the offshoring trend were largely based in Manhattan or the West Coast, in the very high-cost places, and they realized that, hey, there are a lot of other places in the U.S.,” she said, such as Atlanta, Charlotte, Dallas, Detroit, Kansas City, and Orlando, cities from where Genesis10 has been providing domestic outsourcing, or onshoring, services since 2009.

What we do know is change is constant. There are lessons to reflect on from the past 20 years of global outsourcing and the impact of offshore on the U.S. economy as we look forward and consider the role of automation. and the impact on future jobs.

Continue the onshoring discussion, sign up for the Genesis10 blog. 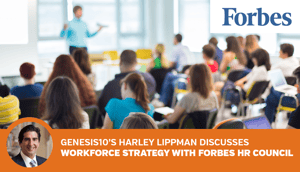 A Major Tech Hub, Charlotte Sees Rising Demand for Tech Talent. Charlotte and the greater North Carolina economy saw steady growth in 2018 and are on track to become a major tech hub with 10.3% compounded annual growth in its tech workforce since 2012...Read More