Genesis10 CEO Harley Lippman was recently interviewed by Forbes reporter Susan Adams about how as a CEO he has not let Attention Deficit Disorder get in the way of his success. In the article, he shares shares how he has worked through challenges with ADD to build a successful business and technology talent and solutions firm: 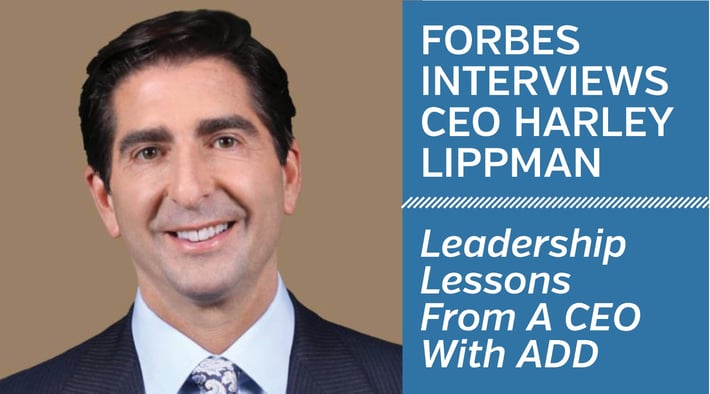 Leadership Lessons from a CEO with ADD

Harley Lippman, 59, is the CEO and sole owner of Genesis10, a $185 million technology staffing and consulting company in New York City that he founded in 1998. He started it in the wake of a business disaster. Earlier that year he sold his tech staffing company, Triad Data, for $70 million in an all-stock deal to a company whose shares promptly plummeted from $27 to 24 cents, leaving Lippman with next to zero. I interviewed him about the leadership lessons he learned along the way. During our talk he revealed that he suffers from Attention Deficit Disorder. Here are edited excerpts from our conversation:

Who were your leadership role models when you were young?

My father. He grew up during the depression, he didn’t go to college and he always told me, “grow it, dig it or build it.” He was an entrepreneur himself, an animator who had his own company. He won a Cleo award for the animation he did on the Alka Seltzer “plop, plop, fizz, fizz” commercial.

What about leadership lessons you learned in school?

My teachers told me I was the most likely to fail. I was at the bottom of my class, I was the last guy to be picked on any sports team and I was socially awkward. I have ADD so I’m a late bloomer as well. When I was young they called me a space cadet. When a teacher would say, “Harley, how much is two plus two,” I’d look up and go, “what?” She’d shake her head and send me to the back of the class where I wore a dunce cap.

How do you know you have ADD?

As an adult I saw a psychiatrist who said I have ADD.

How did you get through high school and college?

With great difficulty. I had an army of tutors who would look at me and say, “Do you understand?” I would nod and say “uh huh.” But they didn’t take the time to say, “Then show me.”

I did have a teacher in tenth grade, my world history teacher, Howard Steere, who really believed in me. He did a lot to bolster my self-esteem. I would go home and read everything about world history I could get my hands on because he inspired me. He focused me.

How could you focus when you had ADD?

If I get really passionate about something I can follow it very closely.

You lost your father when you were young—what was that like?

I was in college, studying in England, and I had an argument with my father. That was the last conversation we had. He died of a heart attack. So I had a lot of guilt over that. My brother got into an argument with him that brought on the heart attack. He never got over that. He struggled with depression and drug abuse his whole life, until he died.

I was the oldest of four. It turned out my father was borrowing money to build a new business. Like me, he sold it for stock and the stock crashed.

What did you do?

I came home from England. I had a nine-year-old brother, a 13-year-old sister and a 17-year-old brother. I had two jobs and went to school at a state university. I had enormous guilt and we had debt. I had to collect money that was owed to my father. He did everything on a handshake. I had the police called on me twice. But I collected almost all of it and that helped us for awhile.

How did you get through school and hold down two jobs when you had ADD?

I had to constantly ask questions. I did really poorly on standardized tests so I chose to do papers when I could. Then I went to graduate school in international affairs at Columbia on scholarship. I was very fortunate.

How did you get from international affairs to tech consulting?

I needed a job and a good friend was in the tech world. He believed in me. He also died, in his 30s, from complications from Hodgkin’s lymphoma. I ended up working for two companies and then in 1986 I started my own, Triad Data, which did technology staffing.

Who were your mentors?

I never had a mentor or even a role model.

What leadership lessons did you learn in your first company?

When you’re a CEO, you’re in a room of mirrors. Everything is reflected off of you. I made a lot of mistakes along the way.

In sales I tried to hire people with passion. I thought it was transferrable. I also learned that there is no substitute for integrity. The few times I deviated from that, I regretted it. I hired a guy as the head of my sales team who said, “I will spend your money as if it’s my own.” I came to realize that this guy, who turned out to be grandiose and flamboyant, didn’t save a dime in the bank.

I learned how important it is to establish clear expectations in writing and make sure both parties agree on how you define success. You need to communicate all the time.

Why did you sell Triad?

I believed in the vision of the company, Renaissance Worldwide, that was buying my company and I was getting 16 times EBITDA, all in stock. The industry average was seven to ten times EBITDA. The purchase price was $70 million in 1998 and I was the sole owner.

It was a parade of horribles. We were told that since it was an all-stock deal, meeting earnings expectations was very important. They missed expectations by a lot. The stock crashed, dramatically. It went from $27 to 24 cents. I ended up selling for $2. It all happened in a very short period of time.  I had hired two investment banks to advise me. They were all wrong.

Did you go broke?

I lost almost everything. I felt depressed and felt helpless and hopeless.

What lessons did you learn?

How could you lead after such a spectacular failure?

A lot of people said I shouldn’t start over. But my psychologist said, “Everything you’re saying is a mask for fear.” As soon as she said that a light bulb went off in my head. I pushed the fear aside and started Genesis10. Genesis means starting over and a new beginning. The name Genesis was already taken so I called it Genesis10.

I had to lead by example. I didn’t take any compensation for a year. I had reached out to 12 of my best former employees and ten agreed to rejoin me while taking pay cuts of 40% to 80%. These people had worked for me for eight to ten years. I knew that it was the people who would make me successful or not.

How would you describe the culture you’ve tried to create at your company?

A culture of transparency and accountability. I really try to inspire my people by having them feel like they’re part of a cause. We’re providing jobs for people. I do talk about how important profits are. Profits are like oxygen.

How do you cope with your ADD while you’re running your company? Isn’t it tough to stay on track?

I surround myself with people who don’t have ADD. Glenn Klein is my president and CFO. He’s extremely focused and extremely bottom line. I have an executive assistant named Gabby Angel (her real name!) who is extremely proactive and focused and organized.

For me, ADD strengthens other traits that I have, like intuition, and being able to read people. It also forces me to ask people to give me the bottom line first. I even tell people who make presentations that I have ADD and I say, “Whatever you want to present to me, give me the bottom line first and then I can follow you, because as you go through your story, I will lose you.” But people don’t always do it. They’re on automatic pilot and they go through their routine. After they leave I turn to Glenn and say, “Tell me what they just said.”

How do you hire?

When people interview someone they make up their mind in the first 30 seconds to three minutes. I try to use discipline to overcome that.

I also don’t pay attention to reference checks. Who’s going to give a bad reference?  We may use the references to network from there. What you really need to know is how well someone will get along with your team, how proactive they are, how will they come up with solutions. You can’t find that out in an interview. You have to try to talk to someone’s former colleagues, their neighbors.