Obstacles Veterans Must Overcome as they Move into IT Careers

When you think about looking for a new job, three main job-search tactics come to mind: leveraging your network, drafting and sending out resumes and polishing your interview skills.

Conversely, those three job-search areas are where military members’ skills either atrophy during their course of service or don’t exist in the first place, and may be one reason why veterans’ unemployment continues to be nearly double the rate of the average civilian.

1. Networking
In the military, going outside the chain of command is essentially networking. The military teaches very early on that talking to people outside the chain of command is tantamount to mutiny. One veteran recalls returning from Iraq amped up to return but his contract was set to expire. A unit training at his base was short of officers, so he took the initiative to offer his services. This was a mistake. The service member was reprimanded for actively seeking a position with another unit. Notwithstanding that he was volunteering to waive his rest time in the U.S., deploy to a war zone with a unit short of experienced officers, and giving the Corps one more deployment, this breach of protocol was considered taboo.

2. Resume Writing
There is no such thing as a resume in the military. Instead a soldier's service record book, or consolidated list of duty stations, schools attended and positions held, is reviewed at the highest headquarters “manpower” division.

They simply match current openings with current rank profiles to give each veteran their next “job.” This isn’t a system that requires each individual to write their own version of events thus, resumes do not exist in the military.

3. Interviewing
Talking about oneself during an interview is seen as self-aggrandizing. One veteran recalls Marine Corps boot camp in 1999, where he was forbidden to use the word “I,” and discipline was immediately administered in the form of harsh verbal reprimands, physical fitness or the repeating of mundane tasks.

After months and years of unlearning the word “I,” it  can becomes very hard for service members to speak about themselves. This becomes magnified during an interview where most people are nervous, and thus revert back to their foundational training. For service members this means: 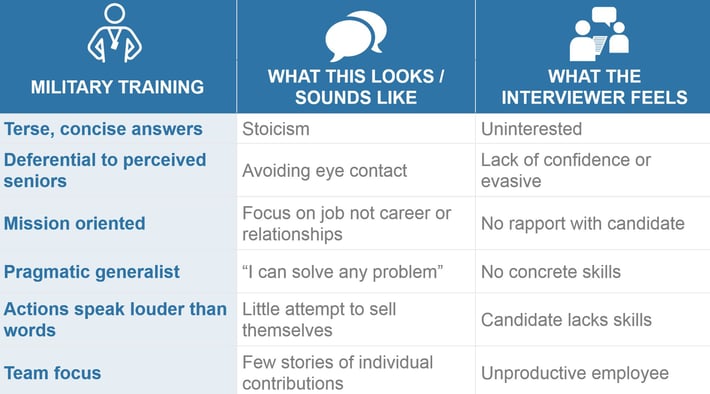 Service members are told for a minimum of four years  –  and generally, these are very formative years as they occur at the outset of that individual’s professional career – that they do not have to think about managing their careers in the way a typical employee in corporate America would because the military decides where they will go and what they will do. Therefore, most veterans do not gain the skills critical to selling themselves as desirable candidates in the competitive white collar workforce.

How do we change this? At Genesis10, we know that many veterans coming out of active duty haven’t cultivated the skills necessary to present themselves in a way that accurately represents their experience and aptitude, but we understand that this is a challenge that can be met. Through translating military experience into terms employers understand, providing in-depth interview coaching and educating hiring managers on the how to accurately evaluate a veteran candidate, veterans are able to overcome the main obstacles they face when attempting to gain access to a business or IT career. 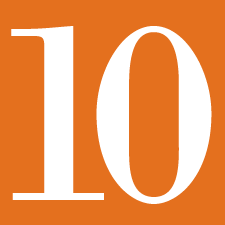 Genesis10 is a talent management firm with a core competency in recruiting. 90% of our recruiters have more...Read More

Genesis10 is a talent management firm with a core competency in recruiting. 90% of our recruiters have more than 15 years of experience recruiting in the IT staffing industry and have an average tenure of 7 years at Genesis10. While each recruiter has the ability to recruit across all technologies, they also have a specialty and the responsibilities to maintain a large pipeline of candidates within a specific skillset (e.g. development, data management, project management, business analysis, etc.). We have recruiters who have been employed in roles that include developers, project managers, business analysts, infrastructure engineers and more prior to recruiting, which is useful as they are evaluating candidates for fit but also overtime as your Genesis10 Recruiter can become your career advocate and be a sounding board as you are evaluating options based on your personal and professional goals.
Read Less