Unprecedented demand for technology talent is starting to pressure companies to raise IT wages, Harley Lippman, Founder and CEO of Genesis10, tells the Wall Street Journal in a recent episode of its Tech News Briefing podcast. 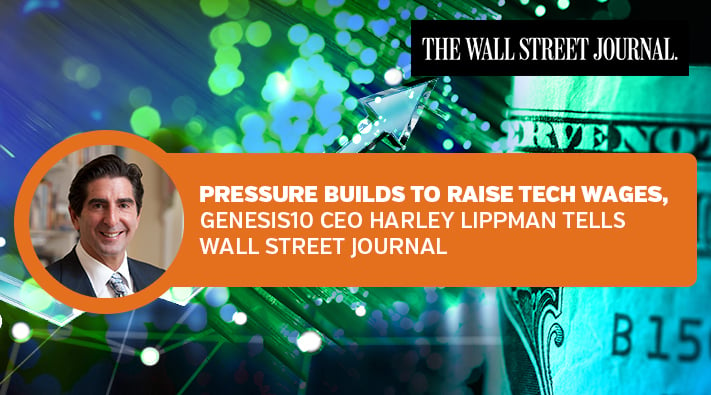 The podcast episode, “Will Tech Sector Finally See Growth in Wages?” focuses on why—despite the historic squeeze on IT talent—tech sector wages have remained essentially flat when adjusted for inflation.

Among the reasons Lippman gave host J.R. Whalen for wages that have barely budged is that “employers have gotten far more sophisticated and savvy in terms of understanding pricing and services.”

This includes volume discounts that companies negotiate with staffing suppliers, the use of managed services providers (MSP) that act as a middleman and often play vendors off one another, and skilled foreign workers on H1-B visas, who currently fill the IT staffing ranks.

Lippman added that this is the “best market in history” and that he’s “never seen more demand for IT workers.”

In response to Whalen’s question regarding what might cause wages to come into line with demand and when that might happen, Lippman pointed to several trends that are already beginning to impact wages.

“The process has been ongoing while it’s not yet visible," he said. "IT managers across the country are complaining because IT workers are looking to get more money elsewhere. It’s a great market for them in terms of choice because hiring is so robust. That is putting pressure on companies to do something about wages.”

Lippman also said the Trump administration’s immigration reform measures are making it riskier for companies to rely on H1-B workers.

“[H1-B workers] make up a large part of the landscape of the IT workforce. Now because the administration is tightening existing laws and not renewing H1-B visas, companies need reliability. They are reluctant to take on H1-B visa [holders]. If you lose an employee, it is very painful. It takes three to six months before even a talented IT person is optimally productive.”

Listen to the WSJ podcast: Will Tech Sector Finally See Growth in Wages?