What are the Technology Talent Implications for Cities on Amazon's HQ2 Finalist List?

On January 18, Amazon announced the shortlist for its second headquarters. From 238 responses to its proposal, it selected 20 cities and metro areas. This much anticipated announcement highlighted Atlanta, New York, Boston, Austin, Montgomery County (Maryland), Washington, D.C., and Northern Virginia. 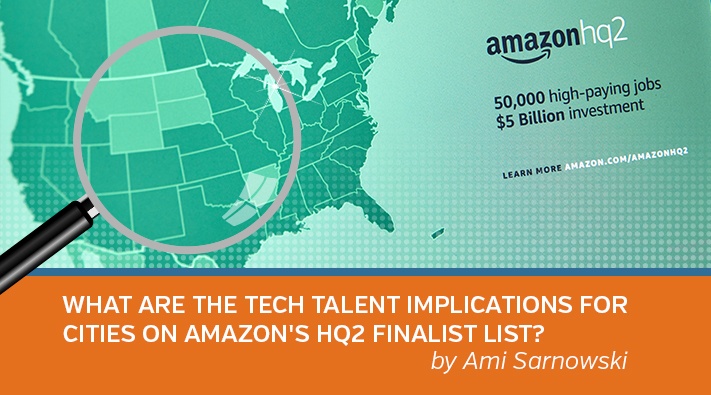 The regions selected move on to the next phase of the process which includes, according to Amazon, a deeper dive into each city’s proposals, additional information and “an evaluation of the feasibility of a future partnership that can accommodate the company’s hiring plans as well as benefit its employees and the local community.” Amazon expects to select the location for HQ2 later this year.

While the finalists are celebrating the news—and those that did not are trying to figure out what they could have done differently to make their region more attractive—CIOs at companies in these cities may want to take a moment to reflect on what being selected for HQ2 could ultimately mean for their workforce strategies going forward.

Amazon has said that it plans to employ 50,000 people at HQ2. And while it has said that the jobs will be high-paying, it did not identify the workforce composition and hiring plans. It goes without saying that many will be technical jobs. Yet with employment growing across the U.S., it appears the nation’s pool of tech talent may be nearing its limits.

For instance, in Georgia where the unemployment rate hovers at 4%, employers post a daily average of more than 5,000 openings for IT jobs, according to the Technology Association of Georgia. And, to take one role as an example, the Bureau of Labor Statistics projects employment of software developers to grow 24% through 2026, faster than average for all occupations.

Many companies are experiencing the tech talent gap first hand and are working directly with schools to ensure they offer training to meet future workforce needs. For example, partnering with the Trump administration, some technology companies recently pledged $300 million for computer science education to help prepare students for tech careers.

As I mentioned in my recent column in the Des Moines Business Record, CIOs Need to Rethink How to Attract Tech Talent, “as companies struggle to attract and retain talent, CIOs may need to evaluate their workforce strategies and consider different tactics, such as relocation of tech talent from other markets, reskilling workers and/or leveraging untapped but highly skilled labor pools.”

For the selected city, these are good problems to have. To have a tech giant in your hometown will create incredible opportunities for the local and surrounding communities with respect to job creation, positive impacts on real estate, and spending to support local businesses.