10 Stats To Know From ADP's National Employment Report, May 2016

The ADP National Employment Report® is a dependable guide that helps bring a monthly snapshot of what's occurring in non-farm private sector employment. Published by the ADP Research Institute®, they collaborate closely with Moody's Analytics to use their expert labor market research. All of the monthly data they provide goes by real transactional payroll data, giving you some reality to what's really going on. 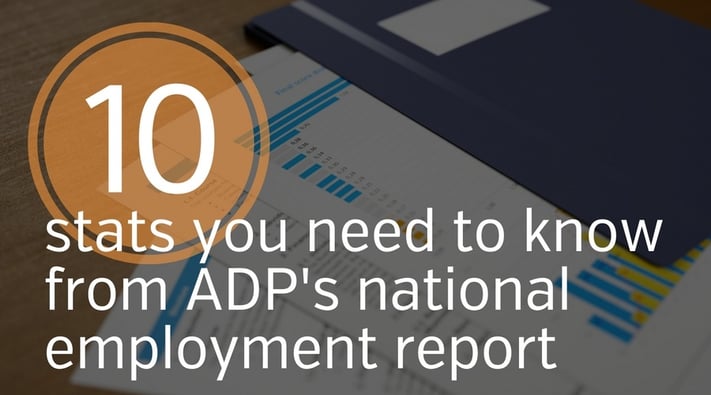 The company breaks down their reports into four categories to give you a fuller picture. You'll find (1)the national employment report, followed by (2)a report on small business, (3)a national franchise outlook, and (4)stats on regional employment.

Here's ten stats you need to know from ADP's national employment report for May 2016 from the four categories above.

Some good news came out of the ADP report for May, especially if you own a small business. With 76,000 jobs added for May, it gives a rosier picture for hiring prospects in the small business sector. Keep in mind this is for small business with 1-49 employees.

The size of these small businesses are what made up the difference in the total.

2. Change in Employment Based on the Small Business's Size

The world of the very small business has become more successful recently thanks to better online business tools and more niche targeting. No doubt you'll find this news encouraging if you're still a fledgling startup ready to scale later in the year.

ADP gives you better clarity on small business employment figures by dividing the goods-producing sector from the service-providing sector. For those producing goods, the employment rate went up to 1,000 new employees. Those providing services saw the most notable jump with 75,000 new hires, giving you an indication that small service businesses have begun to thrive.

You'll find some interesting employment numbers in national sectors. ADP reports the goods-producing sector is down 1,000 in new employees. Manufacturing also continues its decline with -3,000.

The service-providing sector is up the most at 175,000, with professional businesses second at 43,000. Trade, transportation, and utility sectors are third at 28,000.

6. Changes in National Employment Throughout 2016

These national employment numbers you see above have held fairly steady through the first half of 2016. The peaks were in February and March when there were 207,000 and 201,000 new employees hired, respectively. Yet, compared to May of last year (192,000), national hiring is slightly down.

For those who own franchises, hiring improved in May. Franchises hired 19,400 new employees, showing steady growth for businesses like restaurants, food retailers, and business services.

8. Which Franchise Industries Hired the Most?

As you perhaps guessed, restaurants had the strongest employee growth at 16,800, which is up 0.4%. Business services are next at 700 new hires, followed by auto part dealers at 600.

Real estate hiring has become stagnant with no reported new employees for May.

ADP reports that hiring in the south and northeast regions of the U.S. have seen an uptick in hiring since April. This isn't to say they're leaders in who's hiring the most employees by state. The regions of the U.S. that hire the most may not necessarily surprise you.

The west has good hiring numbers, mainly in California where Silicon Valley continues to hire those in technology. In California, there were 21,200 new hires in May. However, on a national scale, the west falls second to the south on overall new employees. For the south, May saw 67,000 hires compared to the west at only 46,000.

Subscribe to the Genesis10 blog below for the latest trends and information on employment statistics and the industries that continue to expand their employee base.