It seems Foxconn is bullish on the tech talent in Milwaukee. Earlier this summer, the Taiwanese electronics manufacturer bought an office building downtown to house its North American headquarters and employ more than 500 people. This news comes on the heels of it breaking ground for a liquid-crystal display manufacturing plant in Mount Pleasant, Wisc., about 30 miles south. There, Foxconn plans to employ up to 13,000 workers. 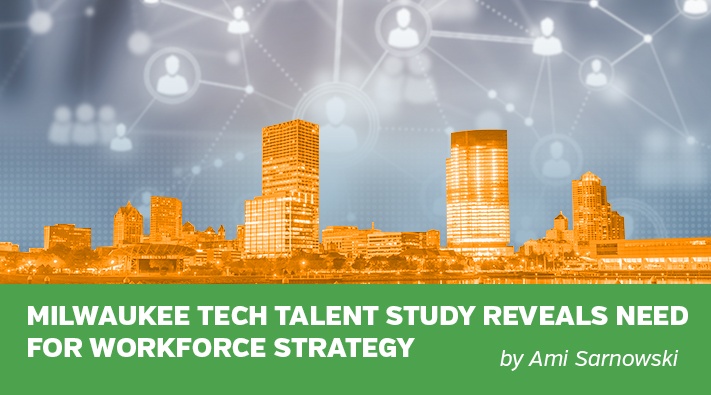 For its part, the state of Wisconsin is hoping that the moves will help turn the region into the next Silicon Valley.  "This really starts to identify Wisconsin and the metro Milwaukee area as home to a new digital technology that's not being manufactured in the U.S., so we see significant follow-on investment and the ability to develop a new digital economy," said Tim Sheehy, President of the Metropolitan Milwaukee Association of Commerce.

Foxconn is one of more than 20 local companies that have partnered on a study of technology talent and its impact on the economy in Milwaukee. Others include Advocate Aurora Health, Johnson Controls, Kohl’s, Miller Coors, Northwestern Mutual, Rockwell Automation and West Bend Mutual Insurance Company.

The study, Milwaukee’s Tech Talent Impact: An Overview of Tech Occupations and Tech-Dependent Industries, reveals that the region may need an additional 31,000 workers, at minimum,  in the next five years to fill technology roles vacated by workers retiring or changing careers. Notably this forecast does not include thousands of new jobs expected to be created in Milwaukee (such as those Foxconn is proposing for its new operations) or the digital transformation that’s driving shifts in most industrial sectors.

Other key findings include:

Continuing the momentum, a group of executives representing companies that employ tech workers in Milwaukee is collaborating on a new Talent Supply and Demand Study. We'll be sharing more information on this shortly!

Ami Sarnowski contributes regularly to the Genesis10 blog. Read her post, Robot or Mom? What Will the Future Hold with AI

Subscribe to the Genesis10 blog to find out more about workforce and technology-related topics.