This blog is one of an ongoing series that examines the technology talent gap by major metro area serviced by Genesis10. Coming up we will also be looking at Austin, Charlotte, Des Moines and Kansas City, among others.

Does Cleveland have the Tech Talent to be a Blockchain Hub?

Cleveland has set its sights on being the leader in blockchain technology in the U.S. Is its IT workforce ready?

With Governor John Kasich signing the legislation last August, Ohio became one of the first states to recognize use of blockchain technology to transmit and store electronic records in a range of industries—from financial services to supply chain management, real estate and healthcare.

Blockchain uses cryptography to connect electronic records and transactions and keep them secure from hacking, helping business and government operate more safely and efficiently. Bitcoin is an example of how the technology is used. Blockchain benefits include greater security of information, reduced costs and quicker transactions.

With blockchain, the toughest part of implementing, according to Kevin Dennean, a technology sector analyst with UBS, is the people and the processes. Let’s take a look:

Is Cleveland up to the task?

Bernie Moreno, President of Bernie Moreno Cos., a luxury auto dealership in Cleveland, thinks so. Moreno and other business, civic, philanthropic, educational and nonprofit leaders have launched an initiative to transform Cleveland into a Blockchain Silicon Valley.

Moreno is working to establish a blockchain center, where technology companies can devise blockchain solutions for industry and government. His vision includes institutions of higher education, like Case Western Reserve and Cleveland State universities, that would teach blockchain. His goal is to graduate 1,000 blockchain coders in 2019 and create a blockchain research institute at CWRU. Moreno has other heavy hitters backing him. The Blockchain Research Institute in Toronto is assisting his team in Cleveland. "Cleveland stepped up to be the very first city outside of Canada to want access to the thought leadership we're creating at the BRI," said Hilary Carter, Managing Director. 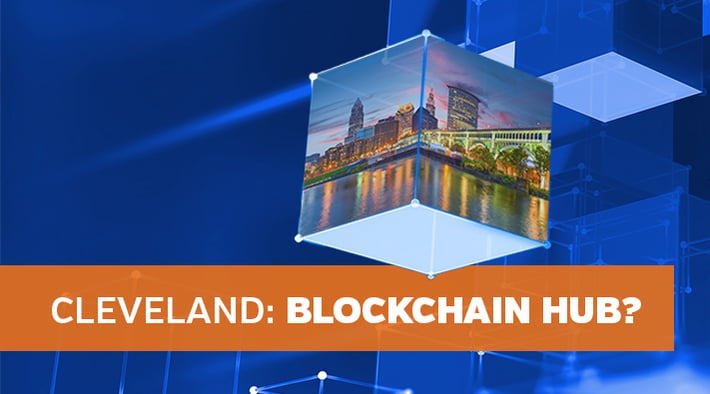 A key part of the plan is a $150 million privately financed Blockland Cleveland incubator where would-be blockchain entrepreneurs could come to develop new businesses. The incubator campus would include a K-8 school and internships for high school students. "We want to make certain that when we do it right here in Cleveland, that we integrate technology into the fabric of the community," Moreno said.

Suzanne Rivera, Vice President of Research at CWRU likes the ambitious idea. "I really think of it as a movement," she says. "This is going to be the way of the future. We can either let it pass us by, or we can seize this opportunity."

To that end, CWRU announced a “Cleveland Blockchain and Digital Futures Hub” to address blockchain technology as well as build on research in other emerging technologies. The hub will bring together business, academic institutions, government and tech accelerators across the region to develop research and build applications. The idea is that by bringing all of these organizations together, the think tank can foster an environment for collaboration, not competition. So, for example, a business-like Rockwell Automation can bring an idea to the think tank and researchers at one of the region’s universities could work on it.

About that target of graduating 1,000 blockchain coders in 2019?

Still, hiring great local talent is one of the biggest challenges facing Cleveland, says Stephen McHale, CEO, Chairman and Co-Founder of Explorys, an IBM Watson Health company. “We are often forced to hire from outside the Cleveland area as we have many highly skilled technology jobs that need to be filled, but we would like to have a more robust pipeline from our local schools and other nearby companies to fill our open jobs.”

In IT (along with healthcare and manufacturing), there’s a “particularly acute misalignment” between demand for and supply of skilled workers, according to a report by Team Northeast Ohio, a regional economic development group that shows by “2020, 65% of jobs in the state will require a post-secondary credential, while just 54% of northeast Ohio residents had one in 2016.

Genesis10, which has been supporting the Northeast Ohio market for nearly eight years, is experiencing a similar misalignment in terms of availability of talent against demand. The chart below provides a snapshot of availability of key IT skill sets in the northeast Ohio region compared to other markets across the U.S. Looking more closely at one of these IT skill sets, Scrum Master, finds that there are only 88 candidates available for more than 750 positions open in Northeast Ohio, with compensation expectations matching the national median. Typically we would expect Northeast Ohio to be slightly lower. 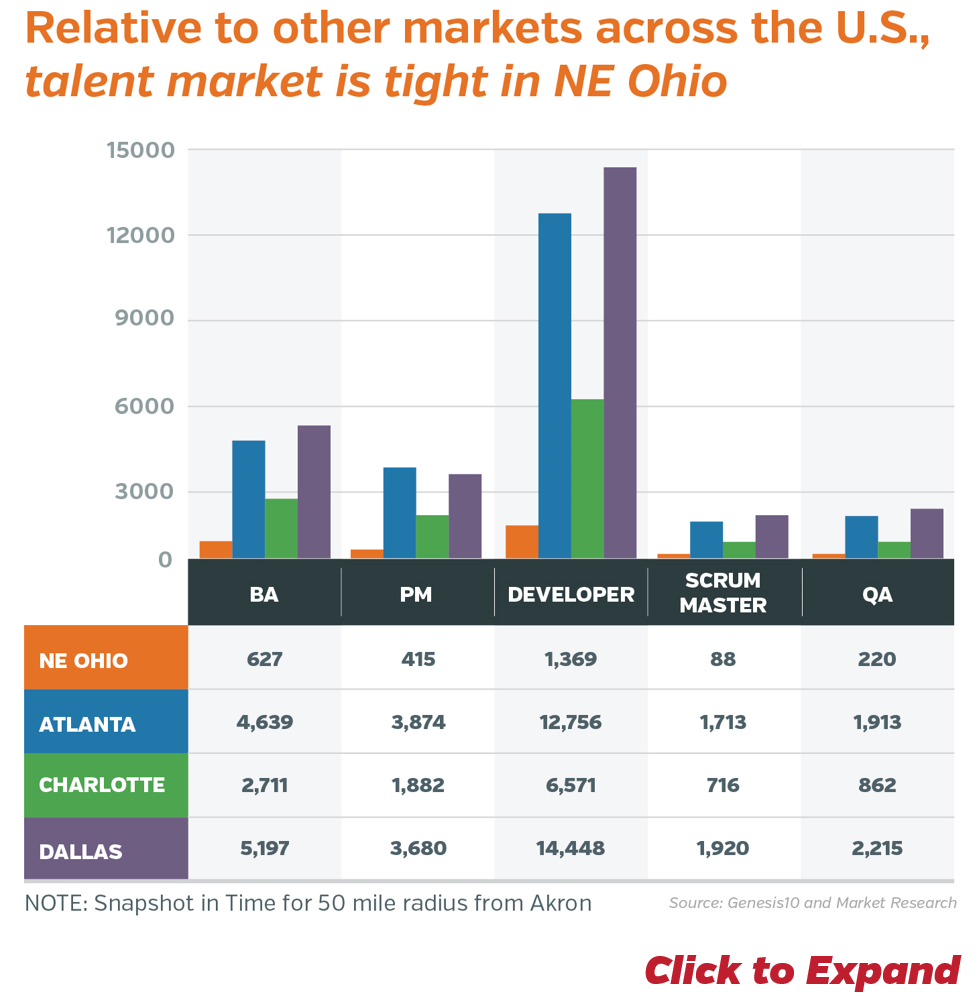 "In our Northeast Ohio economy, healthcare is the largest employer, manufacturing is the second and IT is embedded in everything we do," said Jacob Duritsky, Vice President, Strategy and Research, at Team Northeast Ohio. According to the report, “Aligning Opportunities in Northeast Ohio,” demand outstrips supply in the IT sector for nearly every position from computer network architect to computer user support specialist.

Based on Genesis10’s experience, the economic downturn drained the talent market as it did in Detroit. Much of the technical talent moved out of the state to seek better employment options to be able to support their families. Today, the Northeast Ohio Market is making significant strides in its revitalization effort with a concerted partnership and investment from Corporate America and Chamber of Commerce groups like OHTec, which address the tech talent shortage by focusing on building, attracting and retaining IT workforce capabilities, says Nate Gram, Managing Director of the Genesis10 NE Ohio Office.

Nearly nine years after the 2007 – 2009 recession, according to ClevelandPlus, Northeast Ohio is poised to match pre-recession-level manufacturing output and productivity, boasting 16% growth coupled with a projection of 41% growth over the next five years in the electronic products sector compared to 33% for the U.S. in the same sector. It is clear that Northeast Ohio’s future is bright and the community together is making this happen!