In Observance of Memorial Day

I’m a history buff. So when I was asked to write this piece, my first inclination was to dig into a little research. At the end of the Civil War, Americans began setting aside one day to place flowers and other decorations on the graves of fallen soldiers. (The day was originally called Decoration Day.) Not that long ago, patriotic services and military-themed parades were the center of this federal holiday. Sadly, many of the Memorial Day traditions that were deeply respected by our grandparents and great-grandparents are quickly fading.

In an effort to restore the significance of this holiday, fifteen years ago the White House passed The National Moment Of Remembrance resolution, which calls for “Americans everywhere to pause for one minute at 3:00 p.m. (local time) on Memorial Day, to remember and reflect on the sacrifices made by so many to provide freedom for all.” How many of us even know that?

The following passage on flag etiquette at U.S. Memorial Day.org I found particularly compelling. It elegantly depicts themes of sacrifice and dedication:

In traditional Memorial Day observance, the flag of the United States is raised briskly to the top of the staff and then solemnly lowered to the half-staff position, where it remains only until noon. It is then raised to full-staff for the remainder of the day. The half-staff position remembers the more than one million men and women who gave their lives in service of their country. At noon, their memory is raised by the living, who resolve not to let their sacrifice be in vain, but to rise up in their stead and continue the fight for liberty and justice for all.

Imagine the injustice of returning for military service only to find that some of the opportunities you dedicated your life to serve and protect don’t apply to you when you return to civilian life—simply because you’re a veteran. That’s what’s happening today as post 9-11 veterans struggle to establish themselves in well-paying career-level jobs; the foundation of the American dream.

I know that many corporations are struggling to find qualified talent to fill thousands of available business and technology positions. Meanwhile, there are thousands of well-educated military veterans out there who are highly qualified to step into those very same roles. It’s a perfect opportunity. Please think about it.

In the meantime, I encourage you to attend your local Memorial Day observance this year. Take your kids along with you. I guarantee you’ll be glad you did. 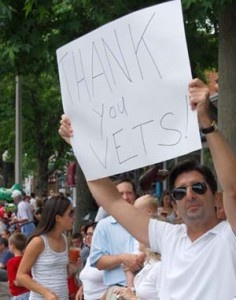 In 1999, Genesis10 CEO and founder Harley Lippman asked twelve of his former colleagues to help him build a professional technology services firm that companies across the United States would rely on to deliver experienced, professional business and IT talent how, when and where needed. Ten colleagues said yes, and the company was named Genesis10 in their honor. Today, Genesis10 provides staffing, workforce optimization and domestic outsourcing solutions. Harley lives in the business working closely with sales, recruiting, operations and his management team to reinforce a culture of giving back and our commitment to our clients and consultants.