Last week I was talking to my good friend, who is a fellow Marine officer, about working for a civilian employer. He is a lawyer practicing in a small town in northern Minnesota. It is a town, which like many others, is very supportive of service members, but due to the fact that veterans make up less than 7 percent of the population, there is not a large representation of veterans in the community. 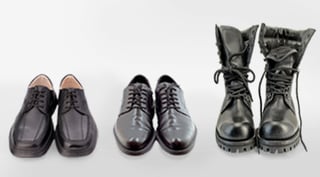 He had been feeling out of place and wanted a chance to identify with other veterans, so he suggested wearing combat boots every Friday to show solidarity – much like fans of sports teams wear jerseys to show their support.

“Combat Boots Friday” is an interesting concept. While my friend’s desire to foster kinship and a sense of belonging with other service members in his community is completely understandable, at the other end of the spectrum, there are many veterans entering or attempting to enter the corporate workforce who would rather seamlessly assimilate into civilian roles rather than provide a weekly reminder to colleagues that they are somehow different or are the “military guy.”

Not to say they are not proud of or no longer value their military experience – that could not be further from the truth – they just don’t want that to be the only thing they are labeled as or known for. Much like any other employee out there, veterans who have joined the corporate ranks want to be an integral member of the office team, and primarily be known for their contributions in the workplace.

At Genesis10, we understand that the literal taking off of the uniform (or the tying and untying of combat boots) isn’t the biggest challenge in a veteran’s transition to the corporate world, but the figurative transformation from service member to civilian employee is what requires the most work.

This need is the impetus for the Genesis10 Veterans Program’s “Reverse Bootcamp.” The training provided within this intensive, one week course focuses on both the similarities and differences of working in the corporate environment and shows that being a successful service member has many parallels with success in the corporate world as well.

The curriculum, which  includes “The New Chain of Command,” “Working in a Matrix Organization,” “Dealing with Ambiguity” and “Translating the Corporate Language,” among other areas of focus, is designed to leverage veterans' strengths providing the confidence and competence needed to succeed in the corporate world.